With 36 major buildings on the 695 acre campus, DePauw offers the latest in facilities and technology to meet the needs of today’s students. The campus includes a new 520 acre nature park, several new and expanded academic buildings, and recently expanded living facilities for students. East College, built in 1877 and the focal point of the university, is listed in the National Register of Historic  Places.

DePauw has nationally recognized programs in its College of Liberal Arts and Sciences and School of Music. The centerpiece of DePauw’s academic programs is its nationally recognized competence program which seeks to ensure that students are certified in three areas: writing, quantitative reasoning, and oral communication. Twenty-two departments represent 47 potential majors and disciplines. The curriculum is a traditional one with students choosing courses in six groups: natural sciences and mathematics, social and behavioral sciences; literature and thearts; historical and philosophical understanding; foreign language; and self expression.

During the past 10 years, DePauw has been consistently ranked in the top tier of national liberal arts colleges by numerous college guidebooks and ranking guides. One of these guides, the 2010 edition of America’s Best Colleges published by U.S. News & World Report, cites DePauw as a school “with outstanding examples of academic programs that are believed to lead to student success.” 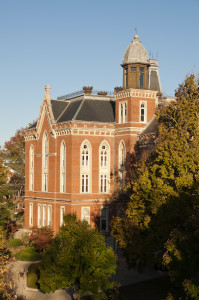 DePauw is ranked among the top 15 colleges and universities in the United States for sending students to study abroad, according to Open Doors, the annual report on international education published by the Institute of International Education.

DePauw is among the “Top 5 Best Values in Private Liberal Arts Schools,” according to the June 2007 issue of Consumers Digest which lists the 100 “top values” in American higher education.

Click on the logo at the top of the page or the picture of East College to the right to be linked directly to DePauw’s website.